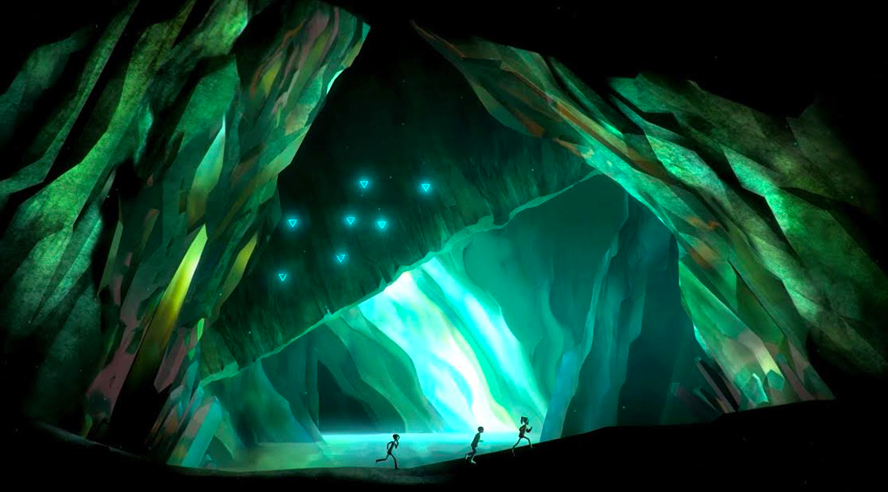 Oxenfree is a game that stands with one foot in the past and one in the present. On the one hand, its narrative is all 80’s and 90’s horror, with a group of teenagers spending the night on an island when events take a strange and deadly turn. On the other hand, it’s a smart character-driven drama with an extensive and intelligent dialogue system that feels like a smart next step for NPC interaction mechanics. Night School Studio might not deliver on Oxenfree’s promising full potential, but it’s still full of great ideas.

Protagonist Alex travels with her best friend Ren and new stepbrother Jonas to Edwards Island for the night in what’s apparently a yearly tradition for teenagers from their hometown. Not as many people have turned up as normal, so they’re only met by Clarissa, a girl with an axe to grind with Alex, and Nona, a girl that Ren has a thing for. Like I said, classic 80’s horror. After a brief game of truth or slap (it’s better than truth or dare, Ren says, because no one ends up having to lick unpleasant body parts), the kids play about with tuning a radio inside a nearby cave, which opens a supernatural rift and kicks off the paranormally charged night.

An adventure game-style experience, Oxenfree concerns itself less with puzzles and more on interesting interactions between the cast of characters. The player can almost always wander about the environment as Alex while picking dialogue options from speech bubbles that appear above her head. This is Oxenfree’s big, sweet innovation; integrating a telltale games-style dialogue system without switching between controllable gameplay and interactive cutscenes.

Allowing you to chime in on conversations to contribute to group discussions, or to stay quiet and listen to the cast of characters interact, Oxenfree’s dialogue system feels like a natural progression of the mechanic. Unfortunately, it’s not perfect- sometimes talking up interrupted someone else talking, while other times Alex waited until they’d finished talking to speak, and these results seem governed arbitrarily. Sometimes my clicks didn’t register on the speech bubble I wanted, resulting in either frenzied, repeated clicks on the fading bubble or in missing my opportunity to speak altogether. That said, this problem was intermittent at most, so didn’t amount to much more than a niggling annoyance.

A good dialogue mechanic wouldn’t be much without engaging writing and interesting characters, and Oxenfree does pretty well in this area. There’s a lot of dialogue in the game, often allowing you three distinct choices, which leads to a monumental number of potential conversation paths and outcomes. The characters have pretty diverse personalities and are pretty well written, although a touch more earnest than real life teenagers might be. They all avoid ending up as the clear-cut horror staple characters that they initially seem like they might have been, and in a way that feels subtle and realistic rather than a forced attempt to make the characters feel “well rounded”. Your dialogue choices affect Alex’s relationship with her friends, and although the plot isn’t massively altered by your decisions, it still feels like your choices are having an impact because the characters believably react to your words and actions.

Apart from dialogue choices, the rest of your time in Oxenfree is spent navigating Edwards Island’s several beautifully realised areas as the plot unfolds. I really dug the game’s handcrafted visual style, even mores when supernatural stuff starts happening. Sometimes you’re stuck in a paranormal event and the screen warps and tears like you’re watching a juddering VHS tape, hammering home the nostalgia that the narrative evokes in a smart, tonally consistent way. Paranormal activity is often given away with an effectively ominous red glow, and when the game started playing with reflective surfaces and ghostly figures juddering in and out of view with a flash of VHS-style tearing and a harsh spike of static I jumped and was legitimately creeped out.

You use your radio a lot, tuning into otherworldly frequencies and solving minor puzzles. The radio is fiddly and a little bit frustrating to tune as it scrolls through frequencies fairly slowly, which does harm the pace of the gameplay a bit, but in a smart move you can keep walking around as you use it (although this isn’t helpful that often, it’s a nice touch).

Oxenfree’s narrative is very strong, and it’s bolstered with that genius dialogue and well written, compelling characters. The game does an excellent job of gripping you and urging you to solve its mystery, yet I do find myself thinking that the narrative would be better if it had a bit more time to breathe and develop, though. While the ending was interesting, I do feel like that portion of the game happens and concludes a bit too abruptly. It’s still good; it’s just not quite as satisfying as what the game felt like it’d been building up to. I completed the game in one session in just over four hours, and while Oxenfree has multiple endings, I don’t think they’re different enough that you should rush back to replay the game right away.

The narrative isn’t just about a supernatural menace; like all good stories, it’s about more than that. In large part it’s about dealing with death; Alex’s elder brother Michael passed away about a year before the events of the game. The way that she and others who knew him deal with it is handled intelligently, and the way that it affects the relationships between the characters feels honest and accurate. Death is messy and sad and makes people feel powerless because there are to answers to the question of how to deal with it. The event and these themes bleed into and colour the story in a thought provoking and fulfilling way.

Oxenfree is a game that made me feel driven to pursue little narrative extras; like my Alex, I was just as fascinated as I was scared by the island’s horrors. A highlight for me was later in the game when if you tune into a certain radio frequency in each area, you can follow a clue to find a letter which uncovers a little bit more of the backstory on the island. By that point I was interested enough in the world Oxenfree had built that I had no problems with trekking about the entire island and uncovering most of these optional tidbits.

Oxenfree’s real strength is not in its narrative thread, but in the way it prioritises its character writing and crafts mechanics that make you feel that bit more involved in a conversation that most other games have managed.

Oxenfree puts on a very strong performance and compels from lots of angles, but ultimately suffers for its length and a lack of satisfying puzzles in the main story. That said, it’s an excellent way to kill an evening or two, and distinguishes itself as a thoroughly unique and worthwhile experience. 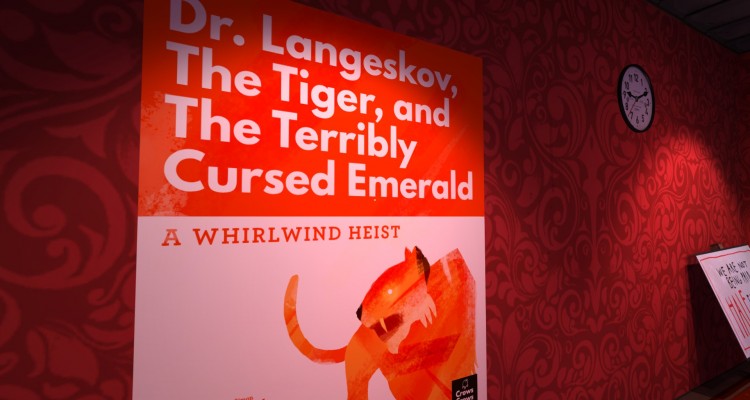 A few days ago, a curious little game appeared on Steam. A “complimentary” game (that is, it’s free, not free-to-play but completely free) from new studio Crows Crows Crows, Dr. Langeskov, The Tiger, and The Terribly Cursed Emerald: A Whirlwind Heist (hereby referred to as Dr. Langeskov, because DLTTaTTCE:AWH, while amusing, is a pain in the arm to type out) has made quite the viral impact on the gaming community.

It’s a really interesting little experience. Fans of The Stanley Parable may recognise the name William Pugh as on of the main designers alongside Davey Wreden on the standalone release, and that makes sense given Dr. Langeskov’s similar style of narrative and game design. If you haven’t played the game yet, then you really should invest the 20 minutes it takes to play through the thing. If you need a little bit more context to pique your interest, then I’ll give you as broad a summary as I can: you’re following instructions from the disembodied voice of Simon Amstell to run several environmental effects, backstage in an action heist video game.

The game is spearheaded by Amstell’s wonderfully awkward character (think Wheatley from Portal 2) as he struggles to keep the game running with the fictional game company’s backstage crew on strike, hence the need for the player to work the effects for an unseen player’s benefit. The game feels like a bit of a poke at game development companies whose employees are mistreated or overworked, especially in light of recent revelations about Konami, as well as the more obvious Stanley Parable- esque commentary on player-game interactions.

Although limited in scope, Dr. Langeskov is a very tightly crafted piece of work. Although made using the Source engine, the environments shine through the placement of lots of visual gags including post-it notes and letters of resignation from disgruntled employees of the fictional development team of the game. The real charm comes from the excellent writing evident in Amstell’s narration, along with his natural talent with comic timing and pacing. While I didn’t laugh out loud, I was certainly smiling the whole way through the game.

I’ve got to say, this is a hell of a way to introduce yourself to the world as a new studio. Crows Crows Crows (these guys are really into names that are a pain to type, huh) have produced a delightful gem to showcase their considerable talents, and it’s really payed off; I’m sure a ton of people will really pay attention to whatever they turn out next. And I really hope that’s the case. Because in a world where the AAA companies seem afraid to experiment and push boundaries in favour of safe money, it’s great to see that this small team is very willing to to produce a very polished little experiment, so that next time, players know that their offerings are worth the money.