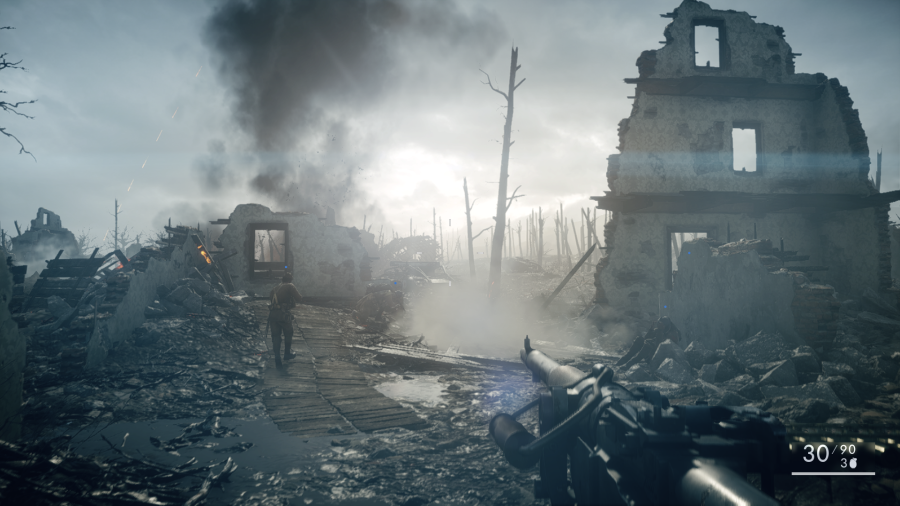 You charge, teeth bared and bayonet raised, through the decimated wasteland and hunker down in the skeleton of a building- it might’ve been an house, once. You scream against the opposition and they scream right back, trading fire with fire until you’re finally overwhelmed. You zoom, dreamlike, over the blasted landscape and inhabit another body. You’re in a much safer fortification, shielded on all sides by walls as sturdy as any in this hellish place. But those walls turn from sanctuary to tomb in an instant when the flamethrowers come. Another death, another body. Then another. And another. And another. You are not expected to survive. You are not expected to last. You will fall here, now, today.

That’s the tutorial sequence that kicks off Battlefield 1. A stunningly evocative level, it cements DICE’s vision: just what an awful, wasteful endeavour The Great War was. There will be more light-hearted tales of bravery and heroism to come, but the overarching tone is set. Flitting between soldiers as they inevitably fall to sheer odds highlights both the countless personal tragedies of the war, and the callous strategy of throwing bodies at a problem.

It’s an attitude clearly distinct from the “all-out action” marketing scheme behind Battlefield 1’s release, with all its slick trailer-spot clips set to thumping electro covers of “Seven Nation Army”. Battlefield 1 is, at the end of the day, an entertainment product. But it’s one that’s produced with the right amount of respect and spirit regarding the history it’s drawing from. 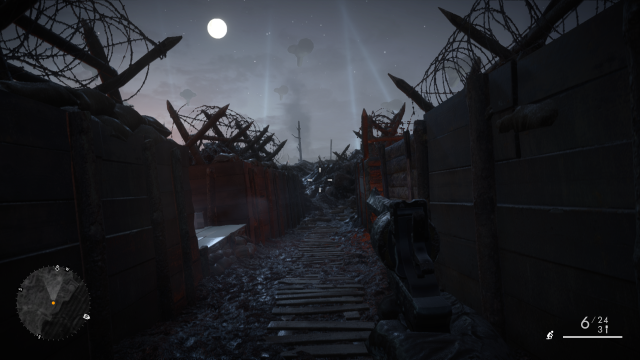 There’s been a certain amount of cynicism surrounding whether Battlefield 1 would play identically to previous Battlefield titles, just with more outdated equipment. Not much has changed in the moment-to-moment play for several instalments, after all. Yet while I must admit the core FPS and vehicle gameplay hasn’t changed much, the mechanical and visual distinction of the early 20th century setting and technology really does change the way you approach play.

Battlefield’s single player offerings have always been lacking, but Battlefield 1 changes all that. Rather than a standard linear campaign mode, this game’s story structure is focused around War Stories; a series of short vignettes following soldiers around different portions of the war. These are varied in delivery style, with framing devices like a Veteran answering his granddaughter’s questions and unreliable narration alongside more traditional third-person narratives, but they’re just as diverse in terms of gameplay. Stories focus on pilots, shock troopers, tank drivers, and militia fighters to deliver various styles of play, while levels are far more open this time to cater to a number of on-foot strategies including (gasp!) stealth. It’s great to see a Battlefield game that actually opens up its single player mode to embrace the series’ strength of freedom rather than another bland series of Call of Duty-reminiscent shooting galleries. You can tackle the Stories in any order you like, too, so if tanks aren’t your thing you can leave that story out altogether in favour of riding a trusty steed through the Afghan desert.

Another novel feature of the War Stories is that they’re actually well written, with interesting and engaging characters that you might care about. As refreshing as the amuse-bouche story delivery structure was, I found myself wanting to spend a bit more time with the soldiers and their stories. Conversely, the occasional chapter is a bit too long, dragging out play sequences a few minutes past optimal length. But I was always drawn strongly enough to the next story beat and gameplay segment that I never felt too fatigued.

On the multiplayer side, Battlefield 1 returns with all the man- and machine-packed features and modes you know and love, plus a show-stopping new addition in the form of Operations mode. These massive up-to-64-man battles play out in a similar way to Rush in previous Battlefield games, with a defending team attempting to fend off attackers attempting to capture deeper points of defended territory. The difference here is one of scale; not only do attackers get multiple “pushes” when they run out of reinforcements (perhaps tipping the scale in favour of attackers since they are reinforced with extra help like battleships and armoured trains), but games are comprised of multiple maps – a full Operation’s worth of play might exceed an hour if the defending team doesn’t nip the offensive in the bud.

Battlefield 1 makes full use of its setting to hold your interest in a way that I found really invigorating despite the game’s familiar chassis. You know how you occasionally learn baffling facts about the war such as the presence of armoured fortress death trains, Napoleonic-style uniforms, and men in actual honest-to-God suits of metal armour? Well, Battlefield 1 utilises those details to great effect.

Beyond simple weirdness, however, WW1 as a setting really does add to the game’s atmosphere even in the non-directed multiplayer environment. The frantic horror of enduring gas attacks, the awful deadly thrust behind a bayonet charge, and chancing a sprint across No Man’s Land are all experiences that highlight the savagery of the setting. Stumbling across a tank in multiplayer is much more frightening when you’re even less well equipped to deal with the rolling box of death than a contemporary soldier is. The mystique of the unfamiliar historical setting revitalises the Battlefield experience in a way that a game with similar mechanical alterations couldn’t manage with a modern backdrop. 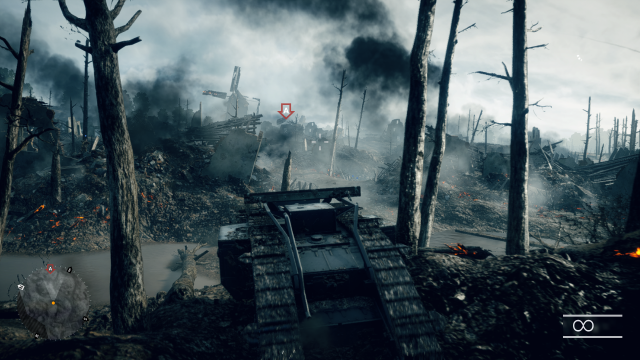 If I have a big issue with anything, it’s the multiplayer progression system. While I continue to value and applaud Battlefield’s appraisal system for supportive and offensive roles alike, I’ve always found the series’ level progression systems to be far too slow no matter which roles you prefer. Say what you will about Call of Duty, but I feel it’s always been better at rewarding you with frequent enough unlocks that you have quick access to a decent amount of choice from the get-go. Battlefield continues to make me work a bit too hard for my taste.

Wrapping up the whole package, Battlefield 1’s presentation is sublime. DICE always impress in this department, but they’ve outdone themselves in rendering the varied theatres of war. Backing it all up is powerful application of sound effects and music; look back at that incredible tutorial, and you’ll find a masterclass in sound environment creation. The crack of rounds filling the air, the desperate scream behind a bayonet thrust, and behind it all a dark, sombre track that roils darkly as you build towards the segment’s crescendo. The section is incredibly perturbing, and the sound design does a frankly near-unparalleled job of cementing the indescribable horror of the situation.

As far as I’m concerned, Battlefield 1 is a resounding triumph. DICE have finally found a way to tell engaging stories and utilise Battlefield’s open-ended strengths in a single player campaign while the whole aesthetic and design philosophy of the game breathes new life into the multiplayer. It turns out that the best way for Battlefield to move forwards was to cast its gaze backwards.