I really didn’t realise just how much I needed a new Gears game until I revved up that iconic Lancer Assault Rifle’s chainsaw attachment and tore through a hapless grunt. Not only is the franchise not done with me, I realised; I’m not done with it. Gears of War 4 doesn’t reinvent the wheel, but it’s not content to leave familiar designs untouched either. It’s a lightly pared-back, almost back-to-basics game that lays a solid foundation for what comes next.

Twenty five years after victory over the Locust Horde, human society is slowly building itself up again. The Imulsion Countermeasure might have destroyed humanity’s enemies, but it also wiped out the planet’s fuel supply and sent the climate into disarray with violent windflare storms plaguing the landscape. Much of the population lives cooped up behind tall city walls under Coalition of Governments’ martial law. Some reject this way of life, though, residing in small village settlements living off the land and scavenging COG bases to survive. JD Fenix is one such Outsider; son of previous series protagonist Marcus Fenix, he and his fellow squad of outlaws are about to encounter a new threat in the form of the monstrous Swarm, seemingly an evolution of the Locust.

“If it ain’t broke, don’t fix it,” was clearly the philosophy at work in designing the core gameplay of Gears 4. A third-person shooter with tight cover mechanics, chunky weaponry, and even chunkier foes, gameplay feels near-identical to previous offerings. The “Active Reload” mechanic (a small QTE each time you reload that allows you to boost the damage of the next clip at the risk of jamming your gun) is present and correct, “roadie run” sprinting is silly as ever, and you can still take downed-but-not-out enemies for a hostage stroll.

Slight tweaks to the gameplay largely feel like an effort to enable more gung-ho players to tear their foes apart. You can now hold down a button while running at cover to auto-mantle it, keeping on the move. Enemies on the other side of cover can be grasped and yanked towards you, stunning them for a combat knife kill. These simple additions allow for new risky and aggressive options in the battlefield, a vital shake-up in for a cover-shooter that could occasionally devolve into hiding behind cover to take potshots. More options to take on threats proactively are always welcome.

Gears was never the most colourful franchise, but Gears 4 makes the effort to inject a wider selection of hues from the spectrum into its levels. There’s still a near-omnipresent use of Unreal Engine GreyBrown(TM), but the palette is livened up by splashes of colour from inclement windflares as well as an increased use of foliage in environmental design. The world feels more organic this time, nature clawing its way back to some semblance of stability after years of ravaging war.

Story-wise, Gears 4 is a mixed bag. First and foremost amongst its problems are the characters. JD Fenix is a charisma vortex; a characterless cypher devoid of a single notable trait. Say what you will about Marcus being a typical gruff space marine type, at least they leaned really hard on all the clichéd personality traits that came to define his character. JD’s squad mates Del and Kait are better; while Del’s expository dialogue tends towards snoresome, his in-game chatter is quite entertaining (his continued disgust at a particular action you can pursue throughout the game had me doubled over), while Kait is an all-round well written character with arc and everything. In fact, it would make much more sense in this story if Kait were the main character. It would’ve been nice if JD’d had enough personality to help invest me in his story, but at least I get to root for Kait on the way. 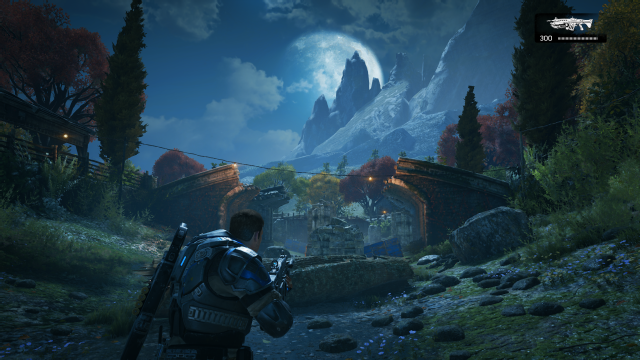 Fortunately, Gears 4’s story deals quite well with suspense and mystery to draw you in. There’s a lot of unanswered questions about the state of the world posed in the first hour or so, and it’s genuinely enthralling to explore the changed land. There’s a certain reverence for the preceding series, and more than a little bit of self-parody that’ll bring a smile to longtime fans’ faces. The gameplay and story both start to chug a bit in the second half, but not so much that it ever becomes a slog. Overall, Gears 4’s smaller scale of story feels like a refreshing reset that lays enough tantalising questions to make me excited for what’s coming next – impressive as the fifth game in a series.

If you’re a very popular little boy and have lots of little friends to run around with, Gears 4 has a lot of legs. Drop-in/ drop-out co-op returns, and Gears 4 is even more fun with a friend (just like every game, ever) with the bots doing a pretty good job of running medical errands. All the Gears multiplayer classics return, improved by the new movement options supporting aggressive playstyles.

Even the now-rare holy grail returns: split-screen local multiplayer! However, on my TV set it ran with substantial black bars at either side of the screen, reducing the screen size by a distracting degree. I’ve found this to be a common complaint, yet I do know people for whom the black bars do not show up.

Horde mode returns under the desperately innovative monicker “Horde 3.0”. Luckily, Gears 4’s Horde mode is more creative than naming convention suggests. Classically, players would team up to defend a small area against waves upon waves of enemies while building fortifications such as razor wire and sentry turrets to aid the effort. Horde 3.0 shakes up the concept through the addition of five classes: engineer, heavy, scout, sniper, and soldier. Dividing players into clearly defined roles helps the team co-ordinate to divide resources and efforts, as well as providing clear roles and perks for each class: engineers are better at building and repairing fortifications, while scouts gain bonuses to close quarters combat. As the running theme goes with Gears 4’s core gameplay, Horde 3.0 retains the best parts of its lineage whilst adding beneficially novel improvements.

Aside from some lacklustre character writing, Gears 4’s most egregious feature is undoubtedly microtransactions. Unlocks and bonuses tied into this system end up being incredibly useful for progressing deep into Horde 3.0, and the process of unlocking chances at new loot packs is incredibly slow; you can complete a full 50-wave run of Horde mode and still not be able to afford the cheapest pack. Were pack bonuses merely cosmetic, this would be forgivable. But after paying the price of a premium AAA game at launch, players should not have to endure such a frustratingly slow unlock system that’s clearly designed to incentivise micropayments. It’s an unpleasant shadow over an otherwise excellent gaming experience.

What really makes Gears of War 4 work is that it just gets Gears. It easily could’ve gone the same way as 343’s Halo games; that is to say a pale facsimile of previous works. But Gears 4 is smart enough to know what to keep and what to tweak to bring the series forward, and for fans of the series there’s a lot to love here.