On the surface, Valley seems like something of an about turn for Blue Isle Studios. The company’s previous endeavour, Slender: The Arrival, was a horror game that sought to build discomfort and tension in the player through disempowerment and an oppressive, creepy atmosphere. Valley, on the other hand, seems to build an altogether different atmosphere; one of exhilarating liberation and light-hearted wonder. It seems that the ability to invoke fear translates to the kindling of joy too, upending stunted horror protagonist agency in favour of grandstanding feats of superheroism.

You are a nameless archeologist that grunts in a male or female voice depending on which option you choose from the game’s start menu. You seek to find the mythical Life Seed (conveniently linked to whichever Tree Of Life De Jour you’d prefer), an ancient and powerful object that you’ve tracked down to an uncharted valley in the Rocky Mountains. Greeted with idyllic rolling vistas, adorable little sprite critters called Daemons, and evidence of now-deserted military presence, you stumble upon a L.E.A.F suit. This snazzy exoskeleton not only grants you with super-human mobility, but also comes equipped with the God Hand- a gauntlet with the ability to extract life force as well as bestow it upon living and once-living things.

Getting around in the L.E.A.F suit is a cinch: to start zipping over the landscape at high speeds, press the “run” button to break into a sprint. You really get going when you hit a downward slope, transferring the momentum into impressive speed- so much so that when you hit a ramp you’ll fly through the air for impressive distances, whether you hit the jump button or not. Valley’s playgrounds are filled with gently rolling hills and dips, which means you’re never far from top speed.

Other manoeuvrability upgrades are granted to you throughout the course of the game, including the ability to double-jump, run on magnetised surfaces, sprint at blisteringly high speed on energised rails, and grapple Spider-man-like from predetermined devices in the levels. Although many of these abilities are context-dependent while I’d rather have skills applicable anywhere, it’s a fun and varied power set that pushes level variety and keeps things fresh for the game’s 5-6 hour run time.

The God Hand is also an interesting tool, but for narrative as well as mechanical reasons. You’ve an energy gauge that depletes when you use certain abilities- one unit of energy is expended to trigger a double-jump, grapple-swing using the aforementioned mid-game skill, and to grant life energy to dead trees, plants, and animals in the environment. You can refill this energy gauge by running through omnipresent orbs, arranged throughout levels like coins in a Sonic game, and by extracting life from living things around you should you become desperate- although there’s enough harmlessly obtainable energy around that I never really had to do this. 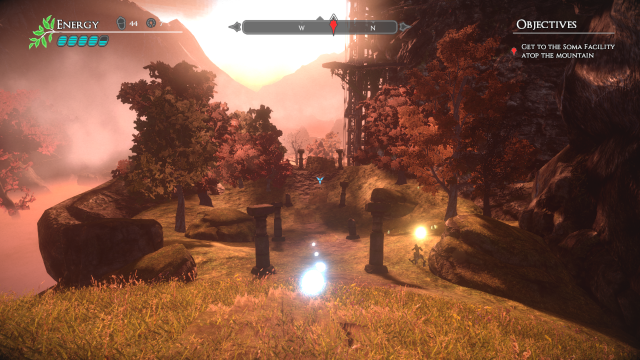 The energy gauge also doubles-up as a life bar. Fall too far off the level or land in a body of water (the L.E.A.F suit is much too heavy for swimming, the game loves to remind you each time this happens), and you’ll respawn at the cost of the health of the Valley- the grass around you is scorched and some nearby plants and animals have died, forcibly separated from their life force. This is explained by the game as a phenomenon called “quantum immortality”; rather than making use of the life energy around you to rejuvenate your body, the suit shifts you into a parallel universe where you never died in the first place. Die too many times without managing to heal the Valley, and there’ll be no living things around to trigger the failsafe and you’ll crumple amongst the barren, broken shadow of the beautiful Valley you’ve come to know. There are also enemies in the world; wildlife for some reason twisted by their deficiency in life energy. Failure to pump enough shots of the stuff their way to pacify them, and they’ll drain your energy until you die.

The death system is a stroke of narrative genius that really ties a bow around the game’s major environmental theme through inextricably tying your wellbeing to that of the world. Valley isn’t a particularly hard game- I never “properly” died, and the only deaths that I did experience were due to mistimed jumps rather than combat- but I really like the fresh take of the world around you doubling up as a life bar, and the way that frames your relationship with the game world and its inhabitant assets. Quantum undeath isn’t the only reason to bestow life upon dead plants and animals. Often, a revitalised tree will drop acorns that you need to unlock ancient doors that guard valuable upgrades and interesting tidbits.

In fact, thorough exploration is highly encouraged; not only is the game a joy to move about in, but scattered notes provide often fascinating context to this Valley and its former inhabitants. Rumination on the meaning of life after experiencing quantum immortality, musings on what the technology being built here might mean to society at large, and simple human yearnings for friends and family back home. Entries are always short enough that the flow of gameplay isn’t broken when you stop to read one. There’s also crates littering the levels that hold acorns, upgrades, and the medallions used to access a mysterious pyramid found near the end of the game. Valley’s story in general is quite well told, if predictable and slightly contrived in places. You pick up audio recordings at the start of the game that are well acted and written to provide just the right amount of exposition in a way that lets you keep on trucking through the level. You will, however, have to look past the fact that your character has all the recordings for at least one of the narrators at the start of the game and always has the prescience to trigger them exactly when they’re appropriate to the current area. This stands out especially when you trigger a potentially-cataclysmic event, only to play the next audio log which outlines in detail the extent of the danger you just got yourself into. Minor foible aside, I was thoroughly engaged in unravelling the history of the Valley all the way up to the revelations towards the game’s close.

Valley is largely successful in what it sets out to do. Blue Isle have taken their experience in atmospheric design for horror and flipped it on its head to offer an exploration of the more positive ends of the emotional spectrum: by turns, I found myself thrilled by my character’s abilities and pleasantly soothed by the beautiful scenery and cleverly adaptive score. So much of the game’s design-to-please is spot on. The dynamism of your movements and interactions within the game’s world are sheer bliss. Weirdly, in many ways Valley feels like a victorious realisation of that 3D Sonic games have failed to achieve- pleasurable platforming and exploration at speed. Valley’s natural environments are pretty, varied, and colourful. And that soundtrack– explorative sections are backed by calm, playful orchestral melodies, while fast-paced sections have a swift audio energy that’s best punctuated when the whole cacophony seems to hold its breath as you make a particularly big jump. The instruments fade out as you fling yourself across a chasm, the chorus chiming in louder and louder as you pass the apex of your leap until all that airborne tension is released upon thunderous landing. When the game’s mechanical, visual, and sound design come together in the right way, Valley is one hell of a treat.

That’s not to say Valley’s without significant wrinkles, though. A good portion of the game is spent underneath the idyllic Valley in dreary facilities that are just about saved by the thrilling rail-running segments that break them up. Even those sequences, although home to the most screamingly high speeds available, were plagued by corners where I’d fall off the world and crash the game (hello again, 3D Sonic!). This, in turn, highlights Valley’s awful checkpointing system. Die normally and you’re reloaded to the nearest safe place to where you died, but load into a level you were halfway through (or crashed out of) and you’ll have to play the whole level again. I had to replay a certain level twice, wasting a good 20 minutes to do so, all because Valley doesn’t feature a mid-level checkpoint system for when you return to the game.

Still, for the most part, Valley shows off Blue Isle’s ability to create a thoroughly pleasant atmosphere (plus, it should be mentioned, a brief section with tense and scary qualities as a new threat rears its head late game). It’s packed with action, intrigue, and a good helping of philosophical musing to boot. If Blue Isle wished to achieve a diametric-opposite to their previous and most well-known effort, all achieved by flipping what they know about building the ambience and character of a game, then they should consider Valley a distinguished success.