No Man’s Sky is a victim of impossible hype and mishandled, potentially dishonest marketing. Whether we like it or not, the pre-release juggernaut that precedes every high-profile release frames our mindset when we approach the finished product. Sometimes a game will live up to or exceed our expectations; The Witcher 3 and DOOM respectively come to mind. Sometimes, though, the end result is somewhat uglier. Promises undelivered, falsehoods uncovered, and potential unrealised.

Unfortunately, I think you know where I’m going with this. With No Man’s Sky we were promised infinity, but in its place we’ve received the void.

No Man’s Sky opens quite well. Stranded on an alien world with a broken ship, you forge through the local wilderness to scavenge your way out of the predicament. You turn your laser-spewing Multi Tool on the rocks, ores, and plants littering the environment to craft the necessary upgrades to repair your beaten vessel. You might stumble across wildlife to scan and catalogue. You fill up on the two fuels required by your ship- Launch Fuel (expended to lift off), and Pulse Fuel (which allows you to travel between space borne bodies like planets and space stations in a matter of minutes rather than hours). When you’re finally ready to leave the planet you’ll blast through the stratosphere and explore the solar system, eventually crafting a warp drive to venture between stars with more than a pinch of trepidation. Are you ready for the whole universe that awaits you? These unsure first steps through the solar system and beyond on your journey to the centre of the universe are laced with palpable excitement at the sheer possibilities lying in wait.

Indeed, the first hours of No Man’s Sky still feel like they hold all of the promise that was hinted at in the game’s phenomenally poorly-communicated marketing. It’s a time full of firsts: you’ll learn alien languages to better understand different intelligent species, solve puzzles both abstract and logical to uncover ancient secrets and extract useful blueprints, and you’ll dive into battle with roving space pirates. Maybe, you might think, just maybe, this game might be something special after all. Maybe the hype was justified.

The core gameplay loop of exploring planets starts out feeling like a fun adventure into the unknown, but quickly becomes an obnoxious bore. There are a few different “types” of planet- snowy ice planets, island-strewn watery planets, greenly forested planets, arid hot planets, craggy rock planets, and muggy toxic cloud-plagued planets. The main difference between enduring the environmental hazards posed by a toxic rain and a blizzard is the colour of the bar on your screen that lets you know how quickly you need to refuel the hazard protection systems in your suit.

Despite there being 18 quintillion celestial spheres you might potentially visit, there’s still a prevailing sense of sameness to it all. Every planet holds the elements that you require to fix your ship should you damage it to the point of dilapidation or deplete its fuel. Sometimes you’ll come across a particularly mineral- or life-rich planet, but limitations in the game’s design even dull those discoveries after a while.

There are millions of creatures, yet they mostly act the same- passive creatures slightly vary in skittishness and aggressors are persistent assholes until you either put a small amount of distance between them and you or fill them with enough lasers to render them dead. They’re incredibly varied in design, but often in an off-putting, randomly-generated way that breeds unintentional hilarity more often than awe. As hysterical as it is to watch a poor slug head welded unceremoniously onto a lumpy T-Rex body waddle around, it’s not exactly the Jurassic Park-style scene of wonderment teased in the game’s trailers. The cobbled-together procedurally generated critters lack crucial character. Flora is almost as underwhelming as the fauna, too; I’ve lost count of the times I’ve seen the exact same plants and fungi turn up on the many planets I’ve travelled.

Also littering the game’s worlds are artificial structures. These are either Monoliths, which teach you words from alien languages (sometimes after little riddles which, while initially entertaining, eventually become predictable or frustratingly obtuse), alien outposts, or abandoned facilities that you must blast into. This summons the wrath of the Sentinels, robotic bastards who take umbrage whenever they detect mining, hunting, or breaking-and-entering for reasons unclear. This would pose a threat if the sentinels didn’t immediately disperse as soon as you enter a freshly-cracked facility or when you simply jump into your ship and take off. Not only are the game’s various buildings unvaried in design and content (get ready to find a lot of the same blueprints repeatedly), they also undermine the game’s major theme of discovery since every planet has clearly seen intelligent spacefaring people before you came along. Especially since you’re never given context for who you are, why you’re on this journey, or basically anything.

Perhaps the most prominent question surrounding No Man’s Sky in the run-up to release was “what do you actually do?” To which the most pure answer is: exploration and acquisition. But since exploration loses its lustre thanks to the lack of continual compelling content to discover, you’ll inevitably lean hard into the acquisition route. As I mentioned before, early on you gain the ability to craft and attach a warp drive to your ship which is used to leap between stars. Fuelling and upgrading your warp abilities is a primary focus. You scavenge for resources, upgrade and refuel your ship so you can more efficiently jump towards the centre of the universe, then rinse and repeat. A few hours in and the game’s boiled down to that endlessly repeated cycle and you’re left wondering if the taxing journey is worth the destination since by then you’ll have seen most of what the game has to offer for a while.

The heavy emphasis on acquisition highlights the game’s most egregious frustration: your tiny inventory. As well as juggling your various ship fuels and life support systems, you’re constantly contending with stunted personal and ship inventories that quickly dampen the experience considerably. You can purchase additional slots for your suit as well as trade extortionate sums of money for a new and roomier vessel, but building up such a fortune through conventional means takes time and that time is spent struggling against your tiny inventory. Even when you do gain additional slots, upgrades to your suit and ship systems vital for survivability and sense of progress make use of those very slots. So you can either upgrade your abilities at the cost of precious inventory space, or remain weak and slow so you can carry a few more stacks of Plutonium without having to shuffle your stuff around fifty times per hour. This constant dithering and hassle just serves to annoy rather than engage.

On top of this repeated fiddling, the game’s UI and menus are slow and arduous to navigate. The game uses a similar menu system to that of Destiny– a cursor is passed over the screen with the thumbstick and relevant icons are prodded sometimes with a press of the X button, but sometimes with held press of the X button (it seems like which option is relevant is arbitrary). It’s a slow, clunky, inefficient process that doesn’t fit a controller, and I doubt it fits a mouse either. Dealing with the system in the heat of a space battle as you frantically try to feed iron into your failing shields (which for some reason replenishes them) underlines the poor interface quite well. 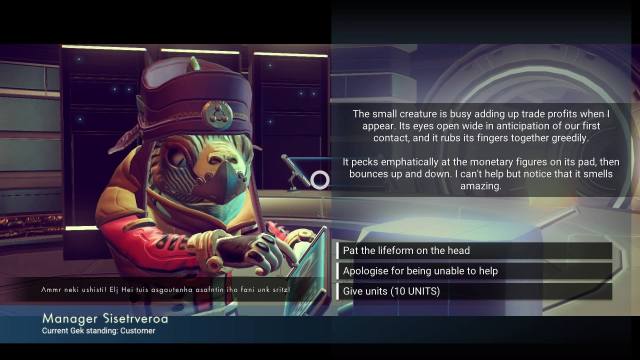 Another vexing oversight on the UI side of the game’s design is the Milestone system. Effectively Milestones are achievements, and pop up to let you know when you’ve performed certain tasks a number of times, accompanied with a nice little musical fanfare and sweetly designed icon plastered on the screen. What isn’t so great about them is how they completely block your ability to interact with anything in the game while they’re triggered. This is especially maddening when you’re moments from icy death due to failing hazard protection systems mid-blizzard and you can’t jump into your spaceship that’s close enough to mist the windscreen with your breath. You’re hammering your fists on the unresponding and indifferent vessel, screaming down the blistering winds pelting your frost-burned face as some cosmic bastard pats you on the back for having travelled exactly 100km by foot.

But then that’s the issue endemic to No Man’s Sky. Many oversights and niggling issues that add up to build a wall between the game that was promised and the game we have. The limited interactivity, the uncountable number of systems of the game that are more shallow than promised (stunted ship variety, crafting, and diplomacy mechanics are perhaps the most offensive examples), the near-nonexistent physics (wildlife clips right through buildings while rocks float midair when their bases are mined away), the weirdly grainy pop-in loading of ground textures as you move closer to a planet’s surface, the core gameplay loop at odds with fundamental design decisions in the game’s balancing. Space flight is little more than cruising through endless asteroids and incredibly rare dogfights. A list of examples far too long to keep reeling off here. The tension between the game’s scale and the game’s scope is what breaks it and reveals its true nature: jumping between an infinite number of underwhelming playgrounds.

Sometimes a glimmer of realised potential shines through the cracks. Cruising towards a new planet with a particularly well-timed track from the phenomenal score by 65daysofstatic (fascinatingly it’s procedurally-generated like the rest of the game, pairing appropriate samples of synth-laden tunes) can send shivers down the spine. The small, flickering flame of your drive to discover is stoked by sadly too-sparse snippets of cryptic backstory. In these brief, fleeting moments where the game works and you’re immersed, it’s clear that with more time No Man’s Sky could have been something special.

Perhaps the game still could be. Hello Games has spoken of supporting the game post-release. As it is now, No Man’s Sky feels more like an Early Access title than a definitive final product. Perhaps with a thorough system overhaul and a host of additions to invigorate exploration, No Man’s Sky might yet reach the stars. Right now, however, No Man’s Sky feels like it needs to take a serious look at its mission statement. I hope it’s not too late for that.