You’d be forgiven for wondering just what the hell Playdead’s been doing in the six years since Limbo released. Much has changed since then; Limbo landed when highly-competent, independent games were still something of a novelty, and its relative simplicity might not hold up if it were released today. Six years of change has eroded and reformed the gaming landscape, all while Playdead toiled in near-silence on their spiritual follow-up to Limbo, Inside.

Honestly? It’s been worth every second. Inside is an incredible game that’s short of almost nothing to prevent it being labelled a legitimate masterpiece. It expands upon Limbo in every single respect while wearing that beating heart on its sleeve.

It’s absolutely imperative to play it knowing as little about the game as possible, more so than the many other recent games that invite that recommendation like The Witness, Undertale, and Pony Island. Don’t waste a first impression of this game by watching a playthrough. This one’s absolutely worth a naked, hands-on experience and I hope you’ll forgive any vagueness on my part regarding Inside‘s narrative and systems. 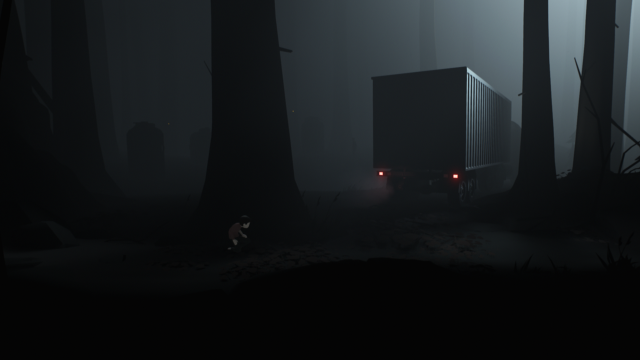 Inside starts in the same fashion as Limbo: a young, nameless boy is dropped into a dark forest and must move forwards. You don’t know why the menacing, uniformed men are combing the woods with flashlights and rabid dogs. There’s no dialogue. There aren’t even any worded tutorial tips. You’re given even less to go on than in Limbo; at least in that game you had a clear objective in finding your sister. Here you’re just a boy on the run in an oppressive and deadly world with a much less clearly defined goal. Maybe the boy has a plan. Maybe he’s just forced to press forward out of circumstance. It’s up to you to play through and decide for yourself, inferring what you can.

Controlling the boy is a simple matter since there’s only three inputs: move, jump, and grab. But there’s so much mechanical variety built upon that bedrock. As well as simple platforming through the 2.5D environments, progression is often tied to environmental puzzles. There’s a staggering amount of variety to these puzzles, making use of elements like physics, gravity, momentum, light and shadow, musical cues, AI observation and manipulation, mind control, timing, and object placement. The game’s short 3-hour length means that you’re always confronting new obstacles and you won’t see the same puzzle twice. Even potential frustration over difficult puzzles is mitigated for two reasons. Firstly, there’s never too much environmental clutter to distract you from the solution; you can often see every relevant object onscreen at once. Secondly, checkpoints are forgiving without feeling insulting- death is quite common, yet you never lose more than a few seconds’ worth of progress.

Inside’s real achievement is its carefully maintained atmosphere of creeping horror. You’re in a cruel world dogged by beings that exude a dispassionate and ruthless air. You’ll experience fraught chases that perfectly evoke the terror not experienced since you were a child running hysterically from something fearsome, as we’ve all done at some point. It’s not necessarily those moments that’ll stay with you, though. Inside’s horror is largely of the more understated kind, tipping its hand to let you glimpse at snippets of a world gone horribly wrong. Relatively calm moments are still permeated by an all-encompassing unease and quiet atrocities are laid bare to play on primal human fears. The 2.5D world is rendered in a highly desaturated palette, with only the occasional touch of real colour. Thick mist lingers in the background while murky waters ripple calmly. This moody world with its faceless denizens of ill intent envelops you with an immediate sense of foreboding, yet there’s a strange beauty to all the gloomy architecture. The mechanical emphasis of grasping and lugging objects around work in perfect unison with spot-on animation to give the game’s environments and characters a tangible, tactile quality that only serves to emphasise the horror.

The game’s sound design contributes as much to the atmosphere of dread as its visuals. Mostly there’s just the pitter-patter of the boy’s footsteps accompanied by his breathing, which changes when the boy becomes more panicked. In a few choice moments of revelation, though, music crests and swells to perfectly punctuate the tone of the scene in contrast with the usual feeling of being left alone with your thoughts in the quiet.

Inside shows Playdead’s mastery of storytelling without words and slick atmospheric direction all in one. You’ve got enough to build a story of your own that might differ from those inferred by each and every friend that plays it. You’ll agree on the broader details of Inside’s story, yes, but there’s a rich well of hints and other elements to wade through and discuss. I have a feeling that there’s more to Inside than they’re letting on. Chase all of the achievements and there just might be something to see for your troubles. In any case, do yourself a favour: play this game, in one sitting, alone. I think you’ll be glad you did.

One thought on “Inside Review”