Like many, I was skeptical of Doom before its release. Following a lukewarm reception to the multiplayer Beta, Bethesda decided not to send out review copies of the game until its release day. While they explained this away with servers going not going live until launch day, it was enough to set off alarm bells. So I want to clear this up upfront: despite pre-release concerns, Doom is bloody fantastic.

Leaping into the campaign, Doom had me within the first three minutes. You, the Doom Marine, awake in a sarcophagus and surrounded by demons that you immediately tear apart. You don your armour and a monitor jumps to life, alerting you to the fact that the Martian facility you’re on is infested with demonic activity. The screen is taken over by the facility’s head, introducing himself as Dr Samuel Hayden. He goes on to explain that you can work together to solve this problem in a way that benefits you both… or he would, if the Doom Marine hadn’t disdainfully smashed the monitor into a nearby wall.

In under two minutes, I’m on Doom’s side. It’s a game that clearly doesn’t care about the grimdark, self-serious attitude exhibited in so many modern action games. This is Doom. Of course you’re not here for bland exposition; you’re here to rip and tear the denizens of hell apart, and you’re placed in the vessel of a protagonist that wants just that.

The faceless and voiceless Doom Marine, in both these first few moments and throughout the game, is more expressive than any number of bland heroes from other games. Somehow he’s possessed of more personality than whatshisname from Quantum Break, Ratchet from this year’s Ratchet and Clank, and any number of bland hero stereotypes. The Doom Marine is pissed off and ready to rend his enemies asunder. He’s a vengeful spirit of rage packed into a suit of Praetor armour, and all of his personality- his fury, his unwillingness to compromise, and his ruthlessly straightforward efficiency- is clearly translated through excellent animation. 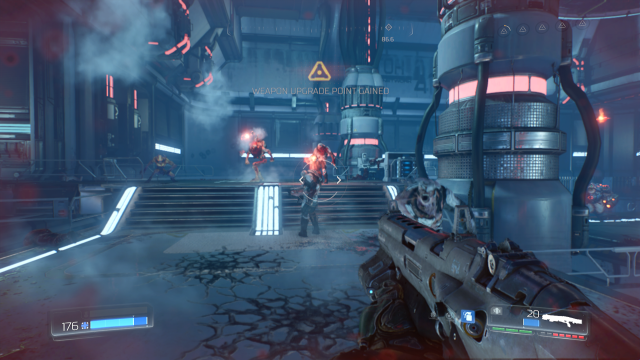 And so you leap guns ablaze into one of the most ecstatically gratifying campaigns in recent memory. As if I had to tell you, Doom is an FPS with a non-regenerating health bar, a lot of guns, and hordes of enemies to tackle. While you start out with a measly pistol, your arsenal builds thick and fast with a range of incredibly chunky and potent weaponry. id Software still knows how to build a great shotgun; the combat shotgun is sure to become your go-to staple for the duration of the game. It’s in distinguished company, though, with a heavy rifle, rocket launcher, and gauss cannon sitting pretty amongst a plethora of meaty weaponry. What’s also incredibly refreshing is the fact that there’s no reloading in this game; you can fire your weapon continually until you’re entirely out of ammo.

To mix things up further, nearly all of the guns are moddable to introduce alternate fire modes. The shotgun, for instance, may be affixed with one of two modifications: an underslung grenade launcher, or the ability to rapidly unleash a triple-shot burst. These mods really do add an abundance of new strategies to employ against the hordes of Hell, and can be swapped out at the press of a button.

As well as old favourites from your roster of guns, the chainsaw returns in all its glory. This time it’s always on you, and it will instantly kill non-boss enemies. The catch is that it runs on fuel; the larger or more formidable the demon, the more fuel is required to saw them apart. Performing a chainsaw kill will always yield an abundance of ammunition, so it’s worth saving some fuel for tight spots and protracted gunfights. 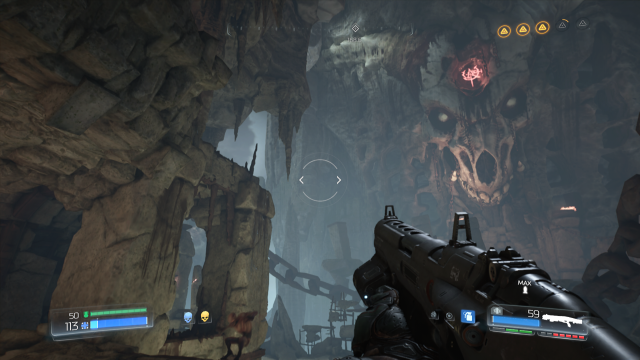 Appropriately to the series’ roots you’re very mobile, with a high movement speed, the ability to clamber up ledges, and a double-jump unlocked early on. This manoeuvrability is just as important to the flow of the game as the gunplay, since with practice and skill you can dodge enemy projectiles and attacks while returning fire in kind. It’s vital to make use of your environment to get one over on the armies of Hell.

One feature that’s been met with pre-release scepticism is the Glory Kill system. When you gravely damage an enemy without killing them, they’ll become dazed and start flashing. Melee- attacking them in this state triggers a short, violent animation where the Doom Marine tears them apart, always yielding a small amount of health. The fear was that this feature would transform the traditionally fast-paced Doom combat into a halting stop-start mess of pre-canned animations.

Instead, Glory Kills actually bolster the unrelenting gunplay, for a couple of reasons. Firstly, the animations take up a perfect amount of time; they’re long enough that you’re given half a second to take a mental break and assess your situation amidst the bloody maelstrom,yet short (and varied) enough that they don’t become tiresome. Secondly, the fact that they give you health encourages you to get stuck into the thick of the action, drip-feeding you health to keep you alive and kicking. 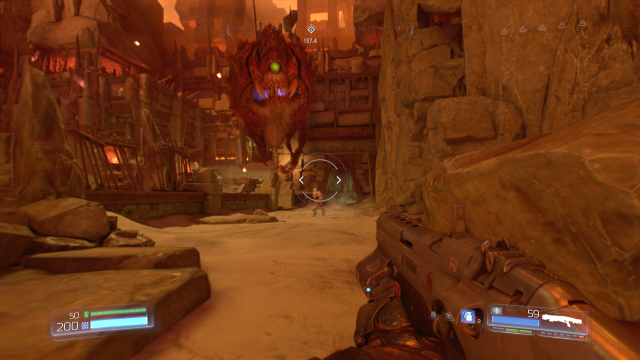 These finely tuned mechanics wouldn’t be much use without good enemy and level design, but id Software excels in these areas too. Hell’s army brings forth a wonderfully realised host of abominations to face off against, with Hell Knights, Cacodemons and Lost Souls returning in rich detail. Every different foe looks great, pleasing and intimidating in equal measure, and crucially projecting distinct silhouettes to make the situation clearly readable to the player. Importantly, each different class of enemy behaves in a unique way, requiring a different strategy to make you switch weapons regularly and flavouring each new encounter with a different required approach to the assortment of cannon fodder and dangerous threats both.

On the level-design side, Doom has you running and jumping through labyrinthine environments on Mars and in Hell. There’s an almost Metroid-esque fashion to the way you’ll approach each stage, platforming and back-tracking to reveal more portions of the map. Despite the complex nature of the routes you’ll run and gun along, the quality of the environmental design is such that you won’t find yourself getting lost very often. Simple platforming also provides much-needed breaks in between the relentless action; I never felt fatigued by an over-saturation of combat, which is a serious achievement in a game with such hectically intense battles.

Jumping between Mars and Hell also switches up the scenery so you’ll not get bored of facility corridors or Physics-abandoned Hellscapes. Each level has its own distinct aesthetic and feel; it’s impressive that id could squeeze so much longevity out of the industrial Facility setting, and each time you warp to Hell you’re exploring a visually distinct portion of the dimension. id proves that just because you’re exploring barren wastelands, they don’t have to be boring or samey. 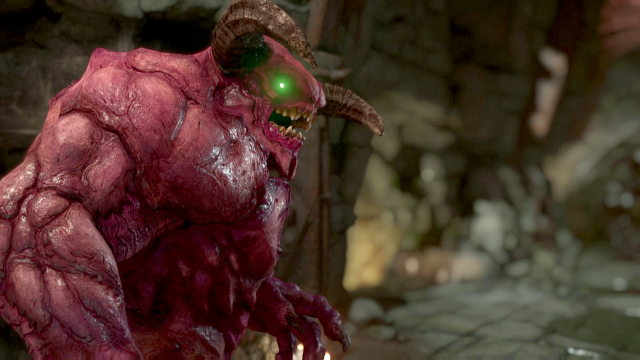 As an extension of the level design, Doom’s collectables are really well-designed too. They’ll turn up on your map as you explore new areas, and with a couple of upgrade points into your Praetor suit they’ll be highlighted regardless. What’s great about Doom’s collectables is that they impact upon the gameplay: aforementioned weapon mods add deadly functionality to your guns; Praetor Suit and Argent Energy upgrades your suit’s systems and your survivability; Rune Trials drop you into a short challenge instance that yields ability-enhancing runes on success, like an improved double-jump or a longer range for ammo and health pickups.

On top of this, there are data logs that unlock codex entries about Doom’s world, a feature that’s actually compelling because the personality of this world and its inhabitants makes me want to learn more about them. There are also little Doomguy action figures which unlock detailed character and weapon models. Overall, I was driven to uncover as many secrets as possible during my time in Doom’s campaign, both for and the reward and the puzzle itself, and I’m sure I’ll keep coming back to comb the maps for illusive tidbits.

Doom is an incredibly slick presentation. It’s a damn fine looking game, managing to make blasted wastelands and industrial facilities visually appealing (it probably helps that the landscapes and corridors are populated by twisted horrors and flavoured by ridiculous scenes of Satanic ritual). Accompanying the rollocking ride is a soundtrack thick with heavy guitar jams that help energise and punctuate the action with aplomb. It’s fair to say that Doom is a sensory tour-de-force in terms of tactile, visual, and audio experiences.

The game is even packed with details like death animations that’ll surprise and delight well into the late game. For all this incidental and visual detail, though, there were pretty significant loading times on the Xbox One. This wasn’t too frustrating in-between levels, but loading in and out of Rune Trials proved to be a bit of a flow-breaking nuisance. Furthermore, if you load the game up and decide to select multiplayer or Snapmap modes, the whole game reloads again to select that mode from the menu. There weren’t too many noticeable bugs in the campaign, although I did experience a complete loss of dialogue audio for a good portion of the game which meant that I had to rely on subtitles for exposition. It’s a good thing I tend to automatically activate subtitles, or I would’ve missed out on a lot of context. 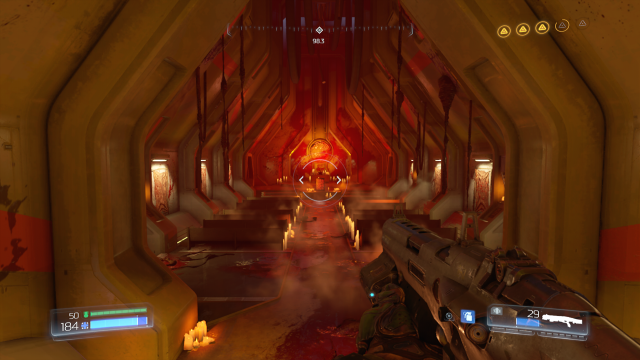 Snapmap mode is a far more intriguing portion of Doom. It’s essentially the community-creation mode, allowing players to craft levels of their own design for others to enjoy. It’s surprisingly malleable in the same vein as Halo’s Forge mode; I’ve seen Snapmaps ranging from recreations of classic Doom levels to co-op missions, tower defence games, platforming challenges and shooting ranges. There’s ample tools for the community to come up with some really interesting creations, and highly-ranked fan-made levels are highlighted for ease of browsing.

Doom is a gigantic breath of fresh air. It’s that big burger that you didn’t know you were craving until you’ve half-devoured it with ravenous glee. The campaign experience is a constant, joyous thrill ride from breathless start to pulse-pounding finish, and the multiplayer and Snapmap sections of the game offer worthwhile distractions. Doom’s purity of vision and self-assurance make it an absolute gem, easily the most enjoyable game of its kind to come out for quite some time. It’s a Hell of a game.