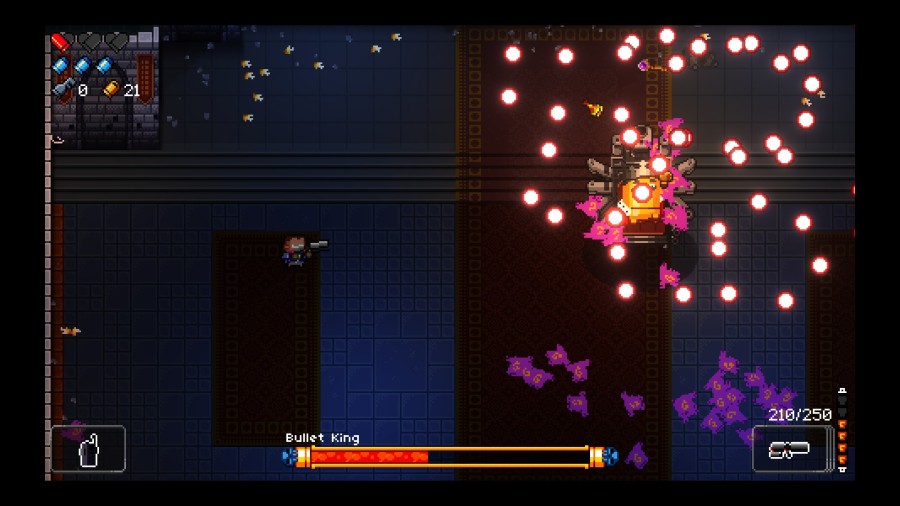 The most recent game to get the Devolver Digital publishing treatment, Enter the Gungeon is a top-down bullet hell shooter with roguelike trappings in the manner of Binding of Isaac and Nuclear Throne. Developers Dodge Roll have created a game that’s worthy of those comparisons; Enter the Gungeon oozes quality, personality, and moment-to-moment excitement in a package that’s likely to hook you in for just-one-more-go for ages after you meant to stop playing.

You’ll control one of four protagonists that seek the Gun That Can Kill The Past, a legendary weapon found in the Gungeon- an ancient subterranean complex where pretty much everyone is obsessed with guns.

The four characters that you control all come with different starting weapons and items. The Marine starts out with a helmet that grants extra armour, an ammo drop, and the starting pistol with the most rounds. The Pilot starts with a lock pick that allows him to try to open loot chests without expending precious keys and a small discount at the Gungeon store. The Convict starts with an extra weapon, the sawed-off shotgun, and briefly deals extra damage if hurt. Finally, the Hunter has a (adorable) dog that increases her chances of finding items like health, ammo and keys on clearing rooms, as well as a crossbow alongside her starting sidearm. 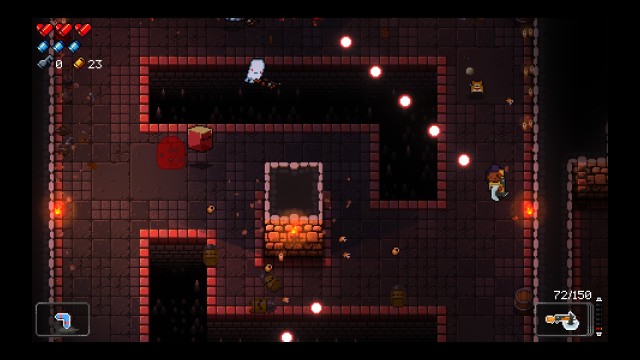 The Marine is clearly intended as the starting character with his large pistol clip and extra armour, so I spent much of my time playing as him. When I got more used to the game, though, I started to gravitate towards playing as the Pilot and the Hunter for their increased item-finding capabilities. I think that the four characters are different enough to subtly cater to different play styles, while similar enough that it’s never too jarring to swap between them multiple times per session as the fancy takes you.

Gameplay-wise, Enter the Gungeon functions like a faster Binding of Isaac with more degrees of freedom. Your character can be moved in eight directions, however you can fire your guns with the full range of circular freedom, making navigating enemy bullets while returning fire yourself feel smooth and responsive.

A major mechanic to master is the dodge roll; Gungeon takes a leaf from Dark Souls’ book by featuring a dodge roll with invincibility for the first half of the manoeuvre. This means you can leap right through enemy fire and you won’t take damage if you don’t land in a spot occupied by bullets. The game makes sure that you understand these basic mechanics early on with a quick and clear tutorial segment, pointing out that the invincible portion of your dodge roll is when your character is diving through the air. This is more important as one might initially think because you’ll be rolling around often enough that you’ll instinctively know the length of space that you’ll be able to dive through without taking damage. 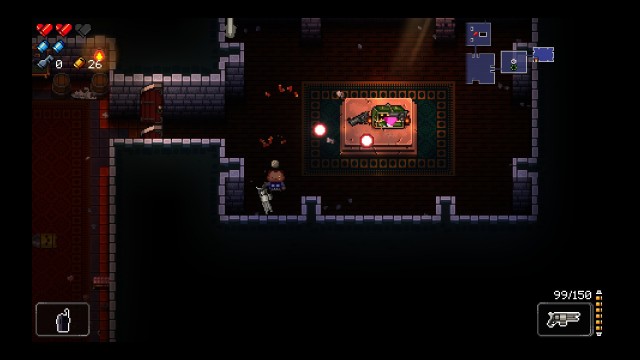 Another important method of staving off foes’ bullets is Blanks. You’ll start out each level with two of these, and activating them clears every hostile bullet in the room while knocking enemies back. These can be crucial when you encounter new enemies or bosses with unfamiliar or difficult-to-dodge attack patterns, and are very useful if you find yourself in a pinch. Enter the Gungeon certainly understands the need to ease players into its bullet hell.

Setting foot into the Gungeon itself, you’ll crash through doors to reveal new rooms in Binding of Isaac style. You’ll flip up tables to provide temporary cover, roll explosive barrels to catch would-be ambushers in powerful explosions, and drop chandeliers onto unwitting enemies’ heads. The snappy, fast-paced combat paired with the gung-ho nature of turning the environments to your advantage gives the game the feel of a John Woo movie mashed with a quirky, Sci-Fi/ Guns-and-Sorcery aesthetic. The balletic chaos is empowered by environments packed with incidental and destructible details- tables are stacked with books and plates that scatter across the floor when flipped, along with any other obliterated objects caught in the crossfire. 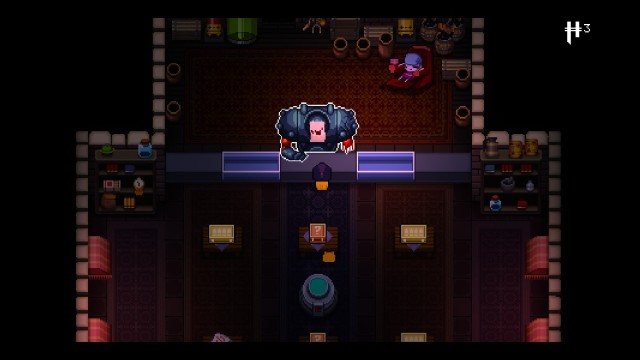 There are five levels of the Gungeon, each with their own general look and feel. The first level is the newest and most well-kept, with lots of libraries, lavish halls and walls alive with lively paintings and portraits. But as you descend levels become more decrepit and complex, and your foes more sinister.

You’re likely to repeat each level- especially the first two or three- a lot; Enter the Gungeon is a roguelike, after all, and death is always a silly mistake away. The game retains a feeling of progression, though. Beating bosses awards you with Hedgemony Credits, a persistent currency that allows you to “buy” guns from the Hub World to unlock their possibility of being dropped in the Gungeon. You’ll also stumble across and help out NPCs on your travels, who range from vendors of new guns to providers of side quests.

It helps to have this meta-progression because, like most roguelikes, you can have both good runs and bad runs. Sometimes you won’t drop enough keys to open precious loot-bearing chests, forcing you to take on bosses with your weak starting weapon. Sometimes the loot that you do get just isn’t the right tool for the job. You’ll often find yourself scrambling for money, just short of the few coins needed to buy some crucial power-up. Progression is always within reach, though, even when luck isn’t on your side. The strength of the roguelike style of play is that you’re forced to make do with what you’ve got, and while your potency is stunted on unlucky runs, you’re still very capable of dealing decent damage and battling through the hardship.

Enter the Gungeon is characterised by its chaos, but the way the game’s designed makes that bedlam manageable to learning players. The visual design of the game is key here- enemy bullets are bright red, and pop against the enemies and environmental details within the screen’s real estate. Your fired rounds are varied in design depending on the specific gun you’re using, but they’re always distinct in their own way, too. This means you’re immediately aware of where the danger is onscreen even when you’re facing down up to a dozen targets attempting to hose you down. Even with tens, even hundreds, of individual objects onscreen, you should instinctively know where you need to dodge and weave given a bit of experience.

The gameplay is well designed, responsive and inherently gratifying, but Enter the Gungeon isn’t content to stop there. The world and its Gungeon are obsessed with guns, and the sheer dedication to laying on brilliant puns over the dungeon-crawling aesthetic is impressive. Your standard enemies are large bullets that fire guns at you, and they’re so adorable that I’m seriously considering hunting down their likeness in plush form. Most enemies are a twist on classic fantasy genre characters, though. There’s a boss based on the Beholder creature from Dungeons and Dragons, except here it carries guns and is called the Beholster. There’s a sentient, skull-faced cannon ball called the Cannonbalrog. Ghost versions of the normal bullet enemies are named Hollow Points. It’s sheer genius, and the game just keeps coming out with this originality with such aplomb that I can’t help to be endeared to the world and characters.

The commitment to variety doesn’t stop there, though. The list of unlockable and lootable guns in this game is long and filled with weapons both classic and bizarre. You’ll pick up AK-47s and shotguns, yes, but a surprising amount of the available death-dealers are either clever references to all manner of pop culture (from James Bond to Mega Man to Ghostbusters), or wacky original ideas like the Huntsman (a shotgun with an attacked axe that swings about to block bullets when you reload), The Silencer (you throw high velocity pillows at enemies) and the Pitchfork (shoots fireballs). It’s always exciting to find a new gun and relish whatever novelties it might bring.

If I could level any criticisms at Enter the Gungeon, it’d be that there’s a bit of a slump when you move towards the level where you’re trying to unlock shortcuts to complete the game. You’re required to deliver items to an NPC to repair lifts so that you can start a new run in a specific level of the Gungeon, but the requirements are quite a tall order and you’re sometimes held back by successive unlucky runs that don’t provide enough of the needed items or currency. It’s needlessly frustrating in a game that otherwise mitigates irritation so ably.

Enter the Gungeon is a goddamn party. It’s big, silly, guns-blazing Hong Kong action movie set in a detailed world that knows how not to take itself seriously. It’s one of the hardest games out yet this year, yet it’s designed to train and inform you so that you’re always aware of just how you faltered when you succumb to the challenges of the Gungeon. And when you do, you’ll hit Quick Restart and leap right back into the action again.