It took an inordinate amount of effort to gather and order my thoughts on Tom Clancy’s The Division. Most vexingly, The Division is a mishmash of conflicting or underdeveloped ideas that make it fall short of greatness. That’s not to say that I didn’t thoroughly enjoy much of the time I spent playing through the game; it’s just that The Division has some very serious issues that I think make it a tough game to recommend.

The game is set in Manhattan soon after Black Friday, when a biological terrorist attack in the form of a money-borne virus has led to the near-total collapse of civilisation in the city. You are a member of the Division, a classified government organisation trained to act in the most dire of circumstances. Things do not start out too smoothly, and you’re left to work with the JTF (Joint Task Force- a sort of coalition of Police, Firemen and other upstanding folk) to Take Back The Streets. Your goal is to shoot people to learn what you can about the virus, shoot people to lay down some basic infrastructure, and shoot people to Establish Order, God Dammit.

All of that shooting people is facilitated by some damn solid cover-based shooting mechanics- The Division is an open-world action-RPG very much in the Ubisoft vein with some MMO components thrown in for good measure. It’s standard but skilfully constructed fare. There’s a nice touch in the cover switching mechanic where you can aim at some cover within range and simply hold the relevant button to have your Agent beeline to that spot. You’re aided by a capably designed HUD and UI that’s very slick, doesn’t intrude on your experience, and is highly customisable. There’s even an option to accommodate for different types of colourblindness, which is really nice to see.

Aside from pumping bullets into enemies using your primary gun, secondary gun, and sidearm, you have access to a number of abilities from Medical, Tech and Security trees to skew battles in your favour. These follow the traditional Healer, Damage Dealing and Tank roles respectively; Medical abilities include healing bursts and revival stations, Tech abilities take the form of offensive gadgetry, and Security abilities are all about dropping mobile cover to improve your survivability. You can also unlock Mods for each ability, which adds a nice extra layer of nuance to your abilities like changing your bullet-spraying sentry turret into a fire-spewing one.

Your abilities are tied into the development of the Medical, Tech and Security wings at your Base of Operations, which I thought was a nice touch. You can develop each wing by earning wing-specific resources from the wealth of encounters scattered around the map. The Division is rife with optional content: the map is soon littered with markers vying for your attention (remember when I said this was very much a Ubisoft game?). Aside from your Story Missions, there are generic Side Missions which are given to you by a JTF officer in each area’s safe house and shorter Encounters which reward you with wing supplies. The side content in The Division is, frankly, one of the most repetitive offerings I’ve seen. If you’re dealing with the majority of these missions in each area like I did, you’ll find yourself repeating the exact same tasks with the exact same criteria, over and over again. When you’ve slogged through another supply drop acquisition (during which the enemies hilariously gather ‘round precious supply crates and unload clips of ammo into them because reasons), you’ll wonder whether Ubisoft actually thought this was worthwhile content, or whether they just wanted to copy-paste another 5 minutes into the game. 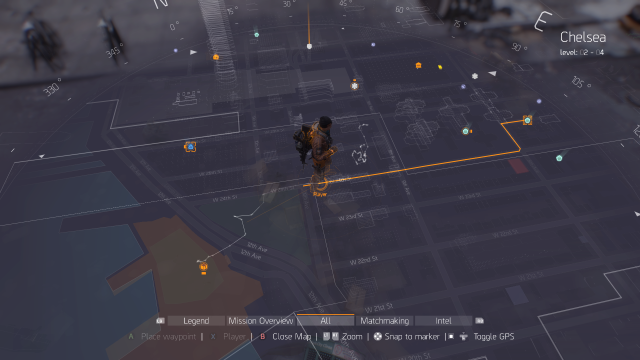 It doesn’t help that, despite there being four different factions of enemies to take on, they’re not all that different from each other apart from visual design and some gimmick. You’ve got the Rioters, who are (perhaps ill-advisedly) all men in hoodies. The Cleaners are a secular death cult that want to save the world by burning pretty much everything and everyone to ashes. Rikers are the crazed convicts that escaped from Rikers Island in the ruckus following Black Friday. Finally, the LMB are a PMC that have access to military-grade gear. Each faction is comprised the same types of enemy classes- grenadiers, rushers (which come in shotgun or melee flavour), snipers, heavies, and normals. At least in Destiny’s repetitive missions, you were fighting one of several very distinct factions that felt very different to tackle.

An unfortunate conflict at the core of The Division lies in the combat itself. From a strictly mechanical, hands-on perspective, The Division has the pretensions of a tactical shooter. It is a Tom Clancy’s game, after all. But the game is trying to incorporate RPG elements at the same time, which means that at many points you’ll be pumping round after round into enemies without them taking much damage or even flinching. I understand that as an MMORPG shooter, The Division had to feature enemies that level up to become tougher, driving the player to acquire more potent weaponry themselves to obtain a competitive damage output. But the RPG elements often feel more like they’re intruding on mechanics that feel like they’re designed to accommodate slick, snappy gunplay. Once you settle into the experience after a few hours you’ll have accepted that that’s just what The Division is; a looter shooter dressed up in Tom Clancy pretensions of “realism”. But each time you find yourself even slightly under levelled for a challenge, that dissonance rears its ugly head again as you slog through bullet sponge enemies that soak up sniper rifle head shots like they’re not steaming chunks of speeding lead through the eye.

Was that language a bit violent, there? Maybe I’ve just become used to shooting a lot of dudes over the past few days. Because that’s how The Division demands order be restored to the city: by mowing down the other guys. Now, I’m not one to wince at violence in video games- hell, I revelled in Superhot’s many and varied ways to dispatch people in indulgent slow motion a scant couple of weeks ago. It’s just that The Division is maybe the first game since Spec Ops: The Line to make me genuinely assess my violent actions in a game, except I don’t think it’s intentional this time.

You’ll get a marker on your map telling you to go and mow down some looters that are picking apart a hardware store, which you’ll oblige before looting every useable resource in the area yourself. It’s nearly always justified ahead of time over comms- “Oh they’re dirty looters smearing their grubby mitts over all that medicine that we need so much more than they possibly could”. There are some story beats and narrative snippets alluding to Division agents not always living up to the paragon status they’re initially romanticised as, but that lens is never directed at the player character where it would’ve been most interesting.

With all the noble posturing about how good and pure your intentions and actions are, there doesn’t really seem to be much change brought about by your mission to restore order. It’s a shame because there’s some great visual storytelling in place- safe houses in particular each showing a different little safe haven carved out of that corner of the good city. But your mute agent doesn’t interact with any of the civilians they save, and the streets you’re taking back never seem to change.

The few characters themselves are pretty one-dimensional, although this might be a result of the limited amount of breathing space each character is afforded. Everyone’s written as either antisocial oddball, or being so dedicated to their “thing” that it’s their sole defining trait. Take the leader of your medical wing: she’s soooooo obsessed with science that she says things like “If he’s not our guy, I’ll eat my centrifuge”. That’s not how anybody talks. I really wish The Division had focused more on the human element of its story. There’s no in-universe justification for the cycle of violence that you’re assured time again is all worth it, leaving narrative rewards on the back seat in favour of the mantra of loot and acquisition that is the game’s core gameplay loop.

The Division is very much a podcast game; it’s extremely mechanically competent but lacks stimulation beyond that. That statement comes with one glaring exception, though: the Dark Zone. This area of the map is The Division’s PVP area, and it plays host to moments that will rival any other gaming experience right now. Grouped up with friends or by yourself, you enter the Dark Zone to hunt down NPCs and score some Dark Zone loot, which is the best gear in the game. However you can’t just walk away with the stuff- you need to extract your haul via helicopter, and when you call for an extraction, every player in your instance is alerted.

Players are free to kill each other in order to steal precious loot, but will be marked as Rogue for doing so. While the risks currently outweigh the benefits for players planning to go Rogue, there’s a real tension around extraction areas that leads to many-a paranoid, Cold War- style game of second-guessing other players’ intentions. Make no mistake: the Dark Zone has led to some sublime gameplay, and Ubisoft was right to publicise that part of The Division so heavily.

The rich level of player interaction available in the Dark Zone really sets that part of the game world apart from the single-player portions of Manhattan which feel even more desolate by comparison. I think that’s intentional, though: the city is supposed to feel off-putting. The Division’s Manhattan is at once eerily familiar to someone that’s walked its streets, and yet so empty and weirdly isolating with its massive streets no longer bustling with the life, and it’s an incredible achievement of technology and design. 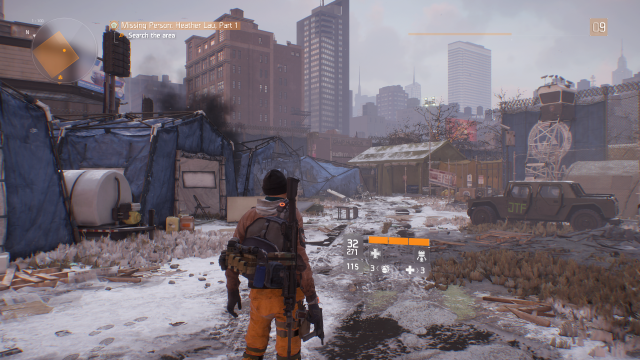 Disappointingly that technical prowess hasn’t helped The Division to launch in a particularly stable state. I encountered a lot of bugs and server issues in my time, ranging from instances of falling through the map to the faceless glitch that Assassins’s Creed Unity made infamous. The real icing on that cake, though, has to be the bug that myself and what must be a massive amount of the player base encountered on the very first mission.

The first mission needs to be turned in via interaction with a laptop in a safe house, one of the areas of the game where other players show up. Due to collision detection on player-character models, not only did everyone have to fight to crowd around the laptop at once, but the object couldn’t be interacted with by more than one person at a time and multiple people trying at once caused it to work for nobody. This led to about half an hour of logging off and on again to find an instance where I could get at the laptop to turn in the first mission and actually start playing the game. That was a pretty bad introduction to the game, and showcased some staggeringly oblivious design decisions.

It seems that I’m giving The Division a pretty hard ride. I think that’s because the game squanders its incredible potential by falling short of the mark in just about every regard. Credit where it’s due: The Division is a mechanically solid game with an incredible PVP concept in the Dark Zone and a valiantly beautiful rendition of a dying New York City. When the game is good, it’s downright magnificent. Sadly, its achievements are marred by a plethora of design and narrative blunders that draw the overall experience short of real distinction.