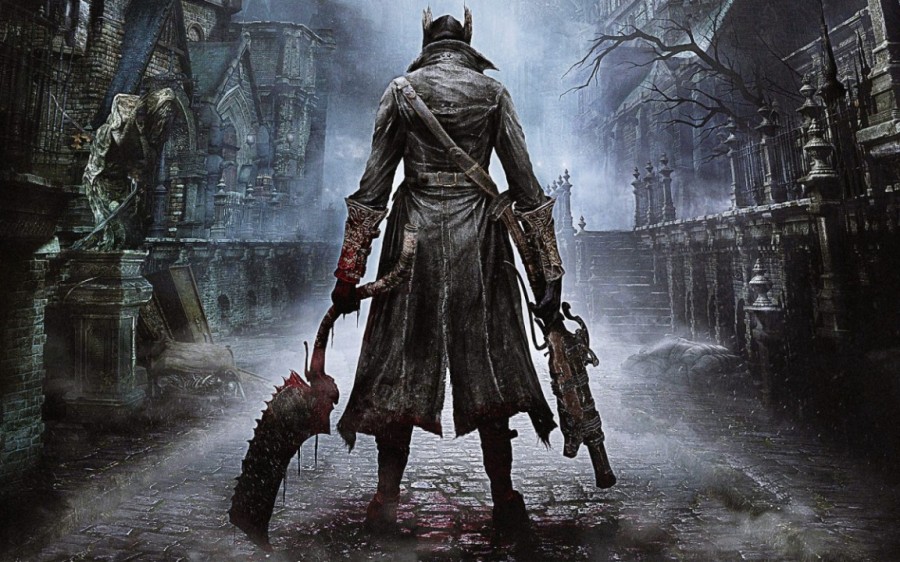 2015 was an unquestionably strong year for video games. We’ve been ridiculously, surprisingly spoiled, to the point that several of the following games would have easily earned a top spot on almost anyone’s list any other year. But even in the midst of such quality, for me these games have risen above the rest. Here are my personal top 10 games of 2015.

10- Rise of the Tomb Raider

Most sequels are content to simply grasp dangling plot threads from the previous game and run the same gauntlet again in new locations with a handful of new abilities, but not Rise of the Tomb Raider. Rise is the rare game that’s been created with all of the issues of its predecessor clearly in mind. Lara is now a somewhat seasoned survivalist, and is far more believable in both her willingness and ability to murder threats to her life. The eponymous tombs have returned, this time fully optional and providing the series’ pedigree environment puzzles that were conspicuously light in the last game. And the semi-open environments of the first game have evolved into a more expansive affair, offering more interesting optional diversions than before. The core game itself is just as well written, and action is just as solid, and the characters and environments are just as beautifully realised aesthetically now as in its predecessor, but Rise of the Tomb Raider has made big improvements where it counts, and deserves a spot among the best games of the year.

It turns out that to reinvigorate interest in sports and racing games in an industry tired with both, all you need is a little rocket fuel. Rocket League is a physics-driven football game with teams of rocket-enhanced cars. It’s as beautifully simple as that. The first time you intercept the ball with a rocket- assisted bash and watch it sail between those goalposts, you’ll be hard-pressed to restrain your elation. Instantly fun, easy to comprehend and packed with nuance as you learn how to play more effectively, Rocket League is pure, effortless fun. What’s not to love when you can drive your enemies up the wall this literally?

The first new Nintendo IP in what feels like forever, Splatoon is a fresh and exciting take on competitive online play. In reply to the landscape of grim and gritty military shooters, Nintendo has delivered a game where you literally brighten up the world to win in a paintball battle to cover the map in your team’s colours. Ablaze with bright and cheerful colour, Splatoon’s presentation doubles up as a clever visual indicator of how well you team is doing, and where you’re needed most. See a big patch of enemy ink in a quiet part of the map? Hose the place with your ink to score lots of points for you and your team! The flow of the match is even tied to your coverage of the map, since you can only effectively move about as kid and squid in areas covered in your team’s ink, while enemy ink slows and damaged you. Awash with a grand variety of weapons from fast- firing paintball guns to far reaching paint rifles and even big paint rollers to spread your team’s ink and dispatch enemies, Splatoon allows for a variety of playstyles. It’s also one of the more viable multiplayer-focused titles released this year due to continuing support in the form of a steady stream of new maps and modes to keep players interested, making Splatoon a shining example of games-as-service.

Undertale is the rare example of a completely unknown entity rocketing to complete success, riding a wave of praise from fans bordering on fanatical. I’m still baffled that a small release blending old school, Earthbound-style JRPG with bursts of combat using bullet hell mechanics can attain such widespread acclaim. Nevertheless, Undertale is all heart. Undertale’s selling point is that you don’t have to kill a single being on your journey through the world of monsters. Each new opponent is a little puzzle exercise, and it’s here that the game really shines (if you don’t fall in love with the game when you’ve experienced Lesser Dog, you don’t have a heart). Every new and bizarre character is a singular delight to experience, and if you haven’t played Undertale then I don’t want to spoil a single detail. Wonderfully expressive with its bright, retro art style and punctuated with perhaps the best soundtrack of the year, Undertale is a pack of wonderful surprises.

Dontnod Entertainment’s episodic game, Life Is Strange, is the first of two Telltale Games- style adventure games on this list. The gameplay itself is almost identical to the Telltale Games’ tried- and- tested formula, with the important distinction that the protagonist, Max, can rewind time. This is both paired with dialogue challenges where you must rewind some conversations with future knowledge to bring about what you think is the most favourable option. Where Life Is Strange excels, though, is in its exploration of player agency and choice. At many points in the game, I was presented with a choice between two different actions. I could see the immediate repercussions of each decision, but I could only guess at the farther-reaching consequences. This left me indecisive for several minutes, on several occasions, terrified that I might make a choice I might regret. Of course, none of this would be effective without a compelling cast of characters, and Life Is Strange knocks it out of the park with a delightful band of personalities (Chloe might be my favourite character this year). Wrap this up with an ending that feels both earned and appropriate based on the game’s emphasis on player agency, and we have ourselves a belter of a game.

Quantic Dream and Telltale Games redefined adventure games for the modern era of gaming with a purer focus on great storytelling, and Supermassive Games has achieved perhaps the biggest sleeper hit of the year with their run at that formula. Until Dawn sets itself up in the most cliche of horror trappings- teenagers partying in a cabin in the woods on the anniversary of a horrible disaster. It’s jour job to guide your characters through the story as events jackknife between lots of horror archetypes, keeping the player on their toes and constantly guessing what’s going on until the whole story wraps together in a very satisfying way. It’s mighty good fun to replay the game several times, feeling out ways to direct the events to shape the characters’ lives, and it can be surprising how differently any two different playthroughs can play out (each of the game’s characters may die or survive until the end). The game excels in driving the player through curiosity and tension to keep as many characters as possible alive… until dawn. (I’m so sorry) 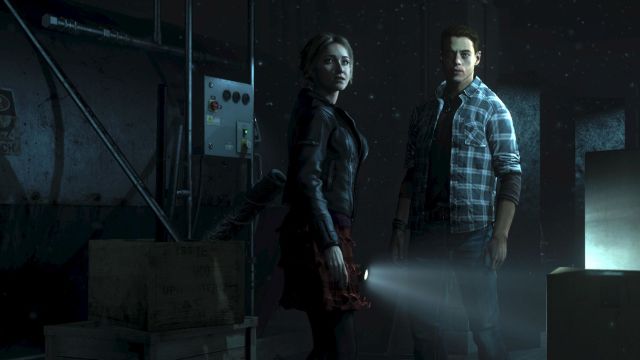 For better or for worse, Fallout 4 is yet another Bethesda Open World Game, with all of the joys and trappings that come with the pedigree. It seems to be the price of worlds with such depth and scope; Fallout 4 is plagued by a multitude of bugs both harmless and serious, and the choice to feature a fully voiced lead character has forced a more streamlined dialogue system that actually serves to limit and cheapen the NPC interaction that the series is so loved for. With such glaring and serious issues as these, how is the game so high up on my list? Because no one else makes worlds like Bethesda. Yes, the game is hampered by technical issues and limitations, but there’s still something so magical about Bethesda’s nothing-nailed-down worlds, and Fallout 4’s Commonwealth is packed with memorable locations, characters, stories and that special Fallout brand of quirky humour. Fallout 4 is a flawed diamond.

If I judged this list based purely on the merits of gameplay, Metal Gear Solid 5: The Phantom Pain would probably sit on the top spot. It’s a testament to its merits that even with its many problems, MGS5 might have taken that number one spot any other year. Hampered by a story that feels rushed and unfinished and an over reliance on repetitive mission types, the game might well be a casualty of its own ambition. What we do have, though, is core gameplay that’s inimitably outstanding on a molecular level. The vast environments Venom Snake sneaks or storms his way through set the stage for the player to approach objectives with unparalleled freedom. The game offers a simply vast array of lethal and non-lethal ways of carrying out your missions, and each and every potential avenue feels fully developed and fleshed out to perfection. You can get a dog with an eye patch, shoot a rocket fist for a long range punch, and fulton-extract a bear. Any game that lets me knock out a bear before attaching a parachute to it and watching it sail towards the heavens wins both its name as a Metal Gear game, and my heart.

The Witcher 3: Wild Hunt is a game defined in the strength of its world. Drawing from and building upon the lore from Andrzej Sapkowski’s novels, the game is CD Projekt Red’s first attempt to bring The Witcher series to an open world, and by God do they surpass the challenge. A keen eye for artistic detail brings the world to life, depicting harsh mountains, swamps and forests punctuated with settlements from tiny villages to grand cities. Populating these environments are an extensive cast of distinct and unforgettable characters, gloriously fleshed out in missions and side missions which provide a level of depth and storytelling ability that’s almost unrivalled. The gameplay itself is solid enough, boasting a satisfying combat system that juggles swordplay and magic to great affect, and matures as the game progresses and you unlock more abilities. This is bolstered with a layer of strategy which requires you to drastically change your approach based on the kind of foe (human or monster) that you face. Make no mistake, though; this is a game of stories, and will leave you with dozens of memories. The cherry on top is the excellent post-release support that CD Projekt Red has given the game, with extensive patches and a slew of free DLC which makes The Witcher 3: Wild Hunt perhaps the best advocate for games-as-service alongside Splatoon.

Bloodborne provides, in my opinion, the best gameplay experience of the year. Mixing up the challenging but fair combat of the Souls games, Bloodborne speeds up the action without sacrificing the careful planning and forethought that From Software’s offerings so often require, resulting in more explosive skirmishes rife with risk and reward. Bloodborne features incredible art design, assaulting the senses with imagery that’s built from both classic Gothic and Lovecraft-esque horror to create its own unique aesthetic in a way only From Software could pull off. This world doesn’t just live, it roils and churns around you as you press forward on your hunt through the city of Yharnam, and the sheer quality of design and variety of the monsters you’ll face is near unprecedented. As the story unfolds, the careful and observant player is rewarded with the fascinating tale of Yharnam as told through subtle details and item descriptions found in the world. All these details add up until you have a game that manages that rare feat of truly immersing you into its fantasy through seamless integration of gameplay, story, and world design. There’s a fair argument for each of the top three games on this list to have the number one spot, but in my eyes Bloodborne wins the top spot. 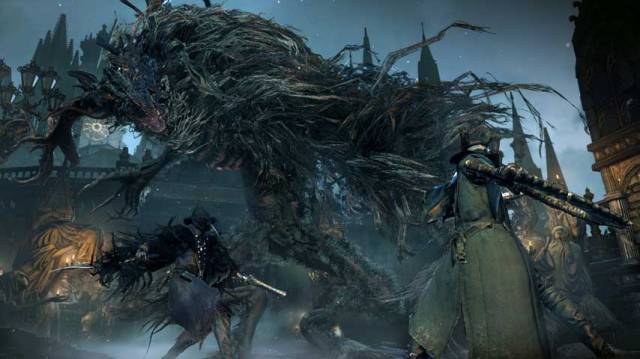